After breakfast of Alpen and kippers, I set off, and was in good time, for the train at Thurso station.  My fears of not getting the bike on the train, and therefore being stranded at the north of Scotland, which had niggled away in the background all week, thankfully proved unfounded, and I spent a very pleasant few hours travelling to Inverness chatting with a retired teacher who had just moved up to Wick.

At Inverness I got on the train to Edinburgh, after popping into the local M&S for some sustenance, and spent the journey to Perth in conversation with a chap who had done LeJoG in 18 days with the Cycle Touring Club.  It transpired that we had ridden some of the same roads!

From Perth, my third train of the day took me to Glasgow, and I spent that journey talking to Raymond, a music teacher, who had travelled all the way down from Thurso on the same trains, and in fact had started his journey even earlier than me that day from the Orkney Isles.

Raymond guided me through the streets of Glasgow as we headed for Glasgow Central, having arrived at Queen Street.  The sheer volume of people in the streets was quite a shock to my system, and I am sure that I would have seen more people in that 5 minutes than I had seen in the whole of the previous week.

I was able to catch an earlier train to Troon, so then had plenty of time to grab a bite to eat and have a hoke around the harbour.  One trick I missed was to get some fish and chips at the Wee Hurrie, a chip shop on the harbour which I found out later did all sorts of fish like monkfish.  I must give it a try next time I am there.

When about to board the ferry, one of the P&O workers radioed ahead to the ship that two motorcycles and a push bike were coming.  “I didn’t push it once!”, I told him rather indignantly.

The ferry crossing was uneventful, except that it arrived 15 minutes late.  Denise had earlier been particularly insistent about knowing my arrival time, so I had an inkling that something might be waiting for me at home.  As I had said that I would be home at midnight, I put the hammer down on the road home from Larne, and would have made it by midnight had it not been for traffic lights in Belfast.  I arrived at about 5 past.

Whatever I might have been expecting, it was not my home group, standing out in the road with an 8 foot banner, party poppers and a yellow jersey!  Apparently I was the second cyclist to get their attention, with a somewhat inebriated chap almost getting the full party popper treatment, before they realised that it wasn’t me.

Cake and bubbly followed, before my welcoming committee wended their weary ways home.  Thanks very much, guys, for staying up to welcome me home.  So very much appreciated. 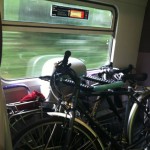 My bike, amongst others, safely aboard the train to Perth 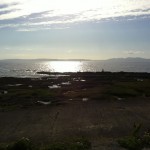 The Isle of Arran, from Troon 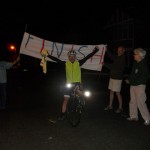 The welcoming committee at the finish line 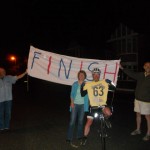 Being presented with my ‘yellow jersey’ by Denise. I think the number must be how old I looked after the trip! 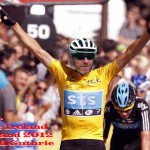