After a few months planning, much training and not a little worrying, I am now poised to begin the Irish leg of my challenge.  Thank you to all who have encouraged, put up with, or sponsored me to get me to this point. 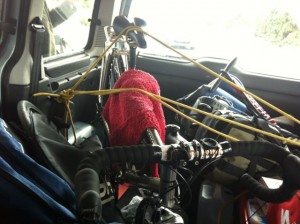 All is secure for the journey down

Kevin arrived at the house at 10 am this morning, and we had the bike and gear loaded inside in no time, despite his tailgate being stuck.  The roads as far as Cork are now wonderful, and light years away from when I came over to Ireland twenty three years ago.  The traffic was light almost the whole way down, and we made good time. 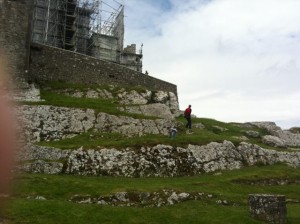 The Rock of Cashel (note Kevin’s thumb to the left of the picture!)

We stopped for an early lunch at the Northpoint hotel, just to the North of Dublin airport.  We sailed round the M50 (a novel experience for me, as the only times I have been on it, I have been in standing traffic).  We had to refuel, and came off the motorway at Cashel, and had the unexpected surprise of seeing a huge monastery, the ‘Rock of Cashel’.  We we going to have a quick look around, but being on the tourist trail, they were sticking the arm in for an entrance fee, so we admired it from the outside!

A brief hold up around Cork due to roadworks, and one on the N71 didn’t delay us too much, and we arrived at the B&B in Toormore, between Schull and Goleen at 5.45. We are now relaxing before heading back to Schull for a bite to eat.

During the trip down I was contemplating getting a head start by cycling the few miles from Mizen Head back to the B&B tonight, but the weather closed in as we drove west, so I think that I will postpone getting wet until tomorrow!

Porridge ordered for 8 am tomorrow, to set me up for my first day on the road.

This entry was posted in Irish tour. Bookmark the permalink.